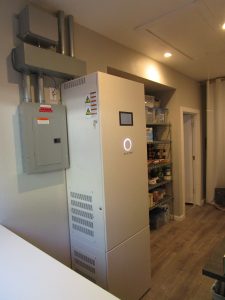 Users have several different modes to choose from depending on their goals and usage. The sonnen battery system can charge from three primary sources; solar, the grid, or a generator (only in Back-Up mode). Which mode the sonnen is set to establishes the source of the energy in the battery.   This blog will focus on modes of operation when the grid is up.

For purposes of this blog, I will be referencing sonnen’s Eco 10 or larger systems, and examples will be from my sonnen, an Eco 17.5 with a 9 kW solar system. My sonnen system feeds a protected load panel (PLP) which has the circuits I want backed up when the power is out.

There are three modes on a sonnen battery;  Time of Use, Back Up, and Self-Consumption. Most of our users prefer the Time of Use (TOU) mode as it saves money daily, allows a buffer of stored energy for back-up power, and is arguably the most environmentally efficient.  Back-Up mode is our second most popular option which maximizes back-up power stored for an outage and can also be used as a temporary option when outages are forecasted. Finally, Self-Consumption mode provides maximum autonomy from the grid, usually retains a smaller back-up buffer for outages, is considered environmentally efficient, and allows the maximum amount of power to be use/stored locally, minimizing importing or exporting to the grid.

Let’s first look how the system works using the Time of Use mode. Sonnen is an AC coupled system, which means the solar first covers a home’s electrical loads before charging the batteries or exporting power to the grid. The order of using solar power is:

For example, it is currently August and my solar system usually turns on around 7am. On sunny days, by 8am my solar power is producing more then my home needs and so my battery begins charging. My sonnen system can charge at up to 7 KW (kilo watt), which means my 17.5 KWH sonnen can be fully charged from solar on a sunny day in just over two hours and my system is usually fully charged by about 10:30am. From 10:30am until about 6:30pm I export power to the grid, receiving credits based on my PG&E rate schedule (I am on EV2).

At 6:30pm, rather than buying expensive power from Sonoma Clean Power/PG&E, I “peak shave” and use my  battery power charged by solar, instead of the utility.   At midnight my sonnen system gets to rest, and power for the home is imported from the grid (while it is least expensive) until my solar wakes up and begins a new day. I can also set a back-up buffer. (On my system, due to the current fires in the area I have mine set to 75%.)

Back-up buffer sets a State of Charge (SOC) floor and it will not discharge past that floor allowing me a comfortable safety net in case the power goes out.   Another option available is to enable grid charging, which will allow you to charge at 250 watts per hour from the grid, per battery module during low tariff /cost windows. In most of our systems, this feature is turned off, meaning we are charging the battery from solar only.

Self-consumption mode operates almost exactly as Time of Use mode, except it is not based on time (Time of Use mode is often called partial self-consumption.) In Self-Consumption mode, as long as solar power exceeds usage, the system uses solar to power the home. When consumption exceeds solar production, it will first discharge from the battery system down to your reserve buffer setting, regardless of the time of day (and PG&E rates) before drawing from the grid. So using my house as an example, if I were in Self-consumption mode, at midnight rather than my battery turning off in the example above, it would continue to discharge the battery until the solar system produces more power than my house uses or until my SOC reaches my reserve buffer. Self-Consumption does allow maximum autonomy from the utility, however this mode is the least popular option of our users as it is not as efficient or financial advantageous as TOU and leaves a smaller buffer reserve then backup mode. 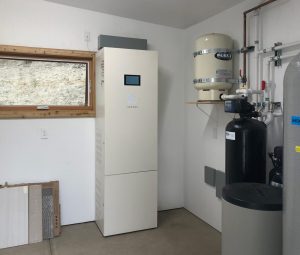 The sonnen system can also be set into Back-Up mode, saving 100% of the battery for power outages. Some of our customers have their system always in this mode, while others put it into this mode when PG&E announces a Public Safety Power Shut-off (PSPS), when rolling black outs are announce, or when other disasters occur. In Back-Up mode, the system will charge the battery from the moment it is activated, regardless of time, and will use the grid and/or solar. The charge rate in Back-Up mode is 250 watts per battery module (an Eco 10, Generation 3.1 system has 4, 2.5 KWH battery modules) and can take between 8-10 hours to fully charge batteries without solar.  In this mode it will keep the batteries charged at 100% until it senses the grid is down when it will power your PLP circuits and recharge from your solar.

Modified Time of Use mode:

Another option that is very similar and more cost effective, is to stay in TOU mode and move the reserve buffer to 100%. This still keeps your battery at a 100% charge, but will only charge from the grid during low cost tariffs. In TOU mode you can also either disable grid charging so it is only charges from solar or enable grid charging which will charge at 250 watts per module, with or without the solar.

One final tip I like to recommend is to remember the primary purpose for buying your storage system. If the primary purpose was to save money, you should be in a TOU mode with a low buffer. If your primary goal is to have power when the grid is down, you should be in TOU mode with a high buffer, or you should be in Back-Up mode.  Personally, I prefer to run my system in TOU mode.  My battery and solar usually cover all of my PLP usage during high tariff windows (3 pm to midnight). This not only saves money, but it also minimizes the need for natural gas driven peaker plants, reduces the demand on utility infrastructure and still provides me a good buffer for power outages.