In my previous 2 blogs, I have discussed how to size a storage system and the components that make up a storage system. I began with these topics so readers could understand that all storage systems are not built the same and why Sonnen’s product is the standard for excellence, safety, reliability and quality. Storage is growing in popularity. In 2017, Synergy installed two Sonnen systems. In 2018, we installed 6 systems, and at the time of this posting (May 1, 2019), we have installed 6 units with 10 more on the books.

This blog will focus on the benefits of installing a storage system with solar. I will break it down into 3 parts; financial, functional and other benefits. Before I start, let me set a few ground rules. The benefits I will be describing are the ones I hear about from working in the industry in Northern California. While they are somewhat universal, they may be dependent on your location and the utility you work with (our area is covered by PG&E).

Under time of use rate schedules (TOU) from PG&E, different times of the day have different costs. For example, under the EV (electric vehicle) rate schedule in the PG&E territory, power at 3 PM on a weekday can be twice as much as power at 9 AM and 3.5 times as much as power at 2 AM. By filling our storage systems during lower cost periods and using it during higher cost periods, we can save, or shave, our costs.

Additionally, new rules are going into effect that will allow homeowners to further save by not just being able to use power from storage during peak, but also to export. Homeowners have been able to export extra solar production for years and with peak schedules moving later into the evening (4 PM) there will be less solar to export. Storage systems have been expressly prohibited from exporting to the grid, but this will be changing in 2019. Homeowners who are able to store power from their solar system will be able to use it or export it freely during peak for financial gain.

About 2 years ago in the PG&E territory, net energy metering (NEM) was replaced with NEM2. Three changes happened, first there was now an application fee for interconnection. Secondly, all homeowners going to solar had to go to a time of use (TOU) rate schedule, and thirdly they would be charged $0.022 per kWh when importing power from the grid. Since storage minimizes imports, it reduces these fees.

Starting in July of 2019, customers who have both solar and storage systems will be allowed to use the EV (electric vehicle) rate schedule, even if they do not have an EV. In most cases, because of the economic spread between peak power costs and off-peak costs, the EV schedule is much more financially attractive then the ETOU schedule available to PG&E customers with solar only.

When storage is paired with solar, it qualifies for the same federal tax credits that apply to solar. The current credit schedule is 30% through 2019, 26% in 2020 and 22% in 2021 then dropping to 10% after that. This is not a deduction but a credit. Credits are a dollar for dollar reduction in tax liability, better than a deduction which can reduce income.

Often, we are asked to propose a battery storage system when a homeowner is comparing it to a generator solution. While generators can be half the cost of a battery storage system, they also have several limitations. Unlike solar and storage, generators do not qualify for the Federal Tax Credits and cannot export to the grid, making them an expense item. When you consider the eliminated cost of not purchasing a generator combined with the Federal Tax Credits, and peak shaving savings, the financial benefits favor storage over a generator.

For most homeowners, when the utility power is down, so is the power in their homes. Often, we forget how dependent we are on lights, phones and computers. The simple task of charging a cell phone, opening a garage door or electric gate can be challenging. With storage we can easily handle these electrical needs. With Electric cars also becoming more popular, being able to charge them for longer outages can be critical.

Some of our customers have medical needs and electrical devices that are critical to their health. These can include CPAP and oxygen machines, electric wheel chair charging, medical alert systems, diagnostic equipment and even air purification equipment to name a few. Power outages can make it difficult for homeowner’s dependent on these devices and in extended outages may require transportation to the hospital.

One benefit many of our customers talk about is how storage systems allow them to function normally when the grid is down. It can be as simple as making a cup of coffee or take a warm hot shower. One of the common misunderstandings I hear from customers is that their space, food and water heating is on gas/propane, so not effected by outages from the electric grid. They forget that these devices count on a small, but essential, electric igniter to light the gas, often rendering these appliances useless when the grid is down.

As we move into the future, PG&E will be turning off electricity to homeowners in high winds for fire mitigation. During the fires of 2017, PG&E turned off both the electricity and gas, not only the fire affected areas, but also to the surrounding areas that never burned. Some homeowners were unable to open their garages and electric gates. Well pumps were down so some had no water. Lights were out, and even natural gas-powered generators were down. Power was not restored for weeks in some of the areas, even though the fire did not directly affect them. With a storage system and solar, these same homes would have continued to have power and in most cases, water allowing home owners to sprinkle the roof with water before they left and move back into their homes before the power was restored.

When the power is off in our home, the internet, cable and phone systems may be running, but our routers and other electric devices often do not. We may still have cell phones and laptops but have to run in an off-line environment. In longer outages, we may not have the ability to recharge our portable devices. Food in our refrigerators and freezers may go bad. With solar and storage, the homeowner will be able to keep in touch with friends and family, run their home office, and the food stays nice and cool. 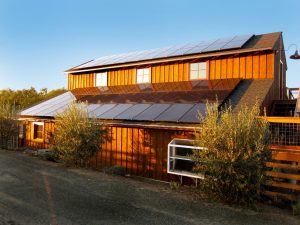 Storage is the perfect pairing with solar and allows a homeowner to protect their energy investment. As more homeowners choose to go solar, it creates its own problems on the grid, creating too much energy during high production times, very little in the early mornings and evenings and none when the sun sets. Storage allows us to balance our energy profile by storing excess energy during the day to use in the evenings. As rate schedules change, TOU peak time frames edge into the early evenings and policies change to charge for exporting power to the grid, homeowners with storage are minimally affected and have more control over their energy use.

Unlike our current model of centralized generation, producing power in huge power plants and transmitting it hundreds of miles to where it is needed, distributed Generation, like solar and storage, puts power closer to where its used. Since solar produced power can be stored and used locally, transmission and distribution lines can be minimized. In remote areas of Puerto Rico, where utility infrastructure has been destroyed, solar and storage are eliminating the need to rebuild the infrastructure. Puerto Rico is also strengthening their infrastructure by installing solar and storage in critical areas like fire and police stations and hospitals. Hacking the major hubs in our power infrastructure is becoming a bigger reality. A more distributed grid allows for more national security and reliability.

Better for the environment

Our peak power needs used to be between 12-6 pm in the summer. This was a time when AC units were kicking on in businesses and homes, causing a huge demand for power. Peaker plants (power plants that burned natural gas to meet the peak demand) were used to meet this demand. Increased solar usage has pushed this peak power demand to 4-9 PM and again peaker plants are being used. Solar is producing too much power in the afternoon and not enough in the early evenings.  As batteries become more common, companies like Sonoma Clean Power will be able to aggregate storage batteries (use many together), to discharge during peak demand with clean renewable energy.  Pairing solar with storage can eliminate the need for gas powered peaker plants, a benefit to the environment and utility rate payers.

Benefits over a generator

Over the past few years, battery storage is gaining in popularity over auto-start generators, even though they can cost more than twice as much. Some of the benefits are financial, like the Federal Tax Credit, and ability to peak shave as discussed above, but it is the functionality and longevity of fuel source, the sun, that really separates the two. A generator needs to be running around the clock, whether demands are high (a well pump) or low (a single light). Homeowners who chose solar and storage mentioned generator noise 24X7 and limited fuel availability as a main issue in this selection. Reliability and safety of fuel storage also favors solar. Natural gas generators can have their fuel supply shut off in fires (as happened in the Northern California in 2017) or earthquakes. Propane, gas and diesel all have limited local storage restrictions and can be unsafe to store. The fuel for solar and storage is the sun, and even on rainy days it will still produce power and the supply can continue indefinitely.

Storage systems are quiet can be installed in living spaces, and the lithium batteries do not need special venting. When you have a small load like an LED light or charging a cell phone, it only draws a small load from the storage system, saving batteries for larger loads like freezers. When you pair a generator with a Sonnen system (back up for low light or heavy loads), it is a much more efficient use of a generator and fuel. When the battery gets near its minimum state of charge, it sends a signal to the generator to start. The generator’s power is directed to charging the battery and running existing loads, so in a short period the batteries are full, and the generator turns off, saving fuel and minimizing noise. 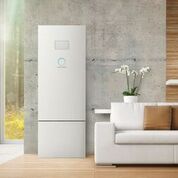 I could go on and on regarding the benefits Synergy customers are finding for storage systems. Solar plus storage systems are providing our customers financial benefit over solar alone. They are proclaiming energy independence as they help define a new distributed generation grid. They are benefiting by having power when the grid is down and stabilizing the grid when it is up. And our customers are finding new ways to support their communities. One of our customers on the western hills of Sebastopol made his neighbor’s lattes when the power went out, providing a central point for the community to gather. Another customer in Oakmont plans to open his garage in outages to allow neighbors to charge their cell phones and laptops. He has also even discussed opening his guest bedroom to those who need a steady supply of oxygen in long outages.

As storage systems continue in popularity, they will shape new ways for homeowners and communities to define their energy independence.