Back-up systems have always been a discussion point in the solar industry, but with PG&E’s Public Safety Power Shutoffs (PSPS) in Northern California, they have become the main topic. Grid reliability in our area has continued to decline with many homes seeing more than 14 days of  power outages in 2019.  I frequently get asked “What is the best approach to backing up my home, a generator or solar with battery storage?” If a customer does not have solar, storage usually can be added, with the long-term costs of solar and storage being less than what they are currently paying  PG&E. For purposes of this article, I will compare the costs of adding a Sonnen Eco 12.5 (12.5 KWH battery) energy storage to an existing solar system vs. adding an auto start 20 kW Generator. 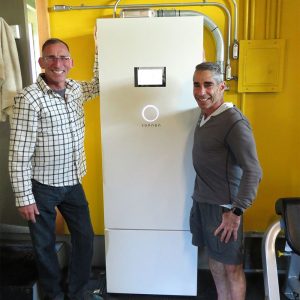 There is no perfect option and different needs dictate which solution can be the best.  Generators usually can produce more power over long periods of time, which is both a pro and a con. The advantages are that they can handle large pumps (3 HP or greater), they are not dependent on where the solar is tied in, and they often work better when backup to multiple structures is required. One of the biggest disadvantages is that a generator needs to run during both high usage times and low usage. Even with a minimal load, like charging a cell phone, the generator needs to stay on. Generators are also noisy, fuel costs can be expensive, fuel storage is necessary, and they contribute to poor air quality.

Battery storage has the benefit that it only uses the power/battery needed. Thus, it can provide more power to run a well pump and minimal power if the only load is a nightlight. Other benefits of battery storage include cleaner energy usage, and an unlimited supply of power from the sun. Storage can also be used on a daily basis by storing power to a battery when it is cheap and using it when it is expensive. PG&E’s new rate schedules have lower power costs during the day (so there is less benefit to exporting your solar production) and higher costs in the early evening when you are more likely to need power, it makes even more sense to be storing your solar production. Self-consuming power protects your investment in solar systems and lowers your costs.

When I speak to customers about battery storage, I usually hear concerns that storage is so expensive when compared to a generator. I was pleasantly surprised when I hung up the phone with one of my customers who had received a proposal for a generator. We realized that a storage system can be significantly lower in cost then a generator when looked at over a ten-year period. Here is the analysis comparing an auto-start generator with battery storage. 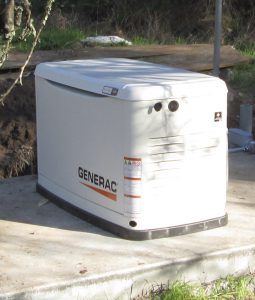 20 kW propane auto start generator – The proposal my customer received was for $13,500 which included the generator, transfer switch, installation and permits.  It excluded the pad required for setting the generator on, and a hookup and propane tank with pad which he expected to cost about $1,500. The reason he is adding propane is his concern that PG&E will also turn his gas off with the electricity, which would render a natural gas generator mute.  The total up-front costs of a propane generator are roughly $15,000 – about half that of a Sonnen Eco 12.5. But let’s not stop there. Let’s look at the ten-year, ongoing costs. A 20 kW generator can burn about 3.45 gallons of propane an hour or 82.89 gallons a day. With an average price per gallon of $2.50 per gallon, the daily cost would be just over $200. Multiply that by ten days and your annual usage is over $2,000!  Add in the annual maintenance and warranty service in years six to ten, about $1,000 on the low side. The seemingly less expensive, 20 kW auto start generator, with a five-year limited warranty, would have a ten year cost of ownership of $15,000 initial cost, $20,000 fuel costs (assuming no increases) and $1,000 maintenance or $36,000.

Some may say this is not a fair comparison because often outages occur when the weather is cloudy and our solar does not produce enough to recharge the batteries while the generator is continuously available. So, let’s add a manual generator for battery charging on cloudy days.

Sonnen Eco 12.5 with 6.5 manual generator – One option the Sonnen system has over many other storage manufacturers, is integrated generator controls that allow charging during poor solar days. When the batteries get low, a customer could turn off the solar, plug in a manual start generator, and run it for two hours to recharge the batteries. Estimated cost of a 6.5 kW manual generator is $500, the cost for Synergy adding a manual plug about $300, total initial costs would be $800. Ongoing costs would be one gallon of gas per day (two hours) at $4, times ten days or $40 a year and $400 over ten years. Maintenance can be estimated at $400 for ten years. Total cost of Sonnen plus a manual generator is $17,200 plus $1,600 or $18,800.

Some diehards may still say this is not fair as the generator is auto start and we are proposing a manual generator. Let’s look at what happens if we add an auto start generator to the Sonnen Eco 12.5. 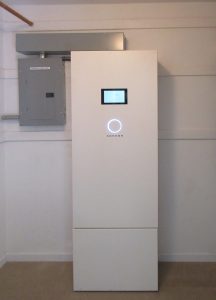 Sonnen Eco 12.5 with 10 kW auto start generator – Since Sonnen has the generator controls and transfer switch as standard features and the generator only has to run a few hours a day to recharge the batteries, the generator costs are significantly less. Let’s assume the worst case: every day is cloudy and the solar is not charging when the power is off. A 10 kW generator added to a Sonnen installed by Synergy costs about $6,500. Add $1,500 (as above) for the pad and propane hook-ups. (This is generous as you would need a much smaller tank.) The total up-front costs of adding a generator would be $8,000. The on-going costs would include propane use of 2.5 gallons per hour, 2 hours a day or 5 gallons a day times ten days is 50 gallons per year. At $2.50 per gallon that’s $125 per year or $1,250 for ten years. Add another $1,000 for maintenance over ten years. The total ten year cost for a Sonnen eco 12.5 is $17,200, the 10 kW generator initial cost is $8,000, the ten year ongoing cost of the generator is $2,250 for a total ten year cost of $27,450. That’s still significantly less than the 20kW auto start generator alone.

For those who are not numbers folks, I am sorry, as you are probably thoroughly confused. My point in “cost comparing” these systems over ten years is to show that battery storage, when it fits the need, is actually much more cost effective than a generator on hard costs. When you throw in the soft cost, energy independence, protecting the value of your solar system, clean energy and helping to solve our power distribution problems, battery storage cannot be beat!