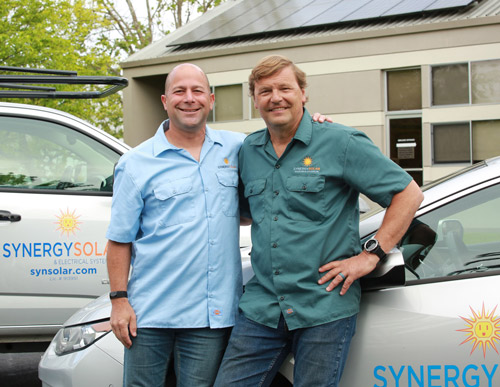 Mike and Jeff are actively involved with each customer,
from the initial sales consultation through the
installation and post installation phases. 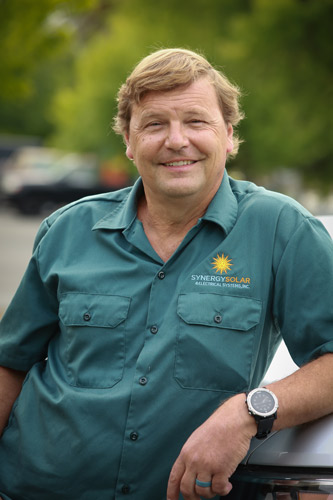 Jeff graduated in 1984 from UCSB with a BA in Business Economics and a minor in Computer Sciences.

Read more
For the next 14 years Jeff pursued a career in sales, marketing and project management with a multi-billion dollar computer company, selling and installing computer systems for community banks. His primary focus was reducing and eliminating the excessive amount of paper produced by financial institutions. Deciding to make family and community a priority, Jeff and his family moved to Sebastopol, and created Coyote Moon Farm. On five acres they created a Market garden, selling vegetables, fruit, eggs and honey to farmers markets in the West County. Jeff sat on the board of the West Sonoma County Farmers Market in addition to helping create farmers markets serving this area. Jeff sat on the Board of Solar Sonoma County, Co-Chaired the Sonoma County PV vendor group, and continues as an active member, focusing on streamlining the permit process for solar PV in Sonoma County. Currently Jeff is a Co-Chair of the NorthBay Chapter of CALSEIA. In May of 2006, Jeff began his new career working as a journeyman electrician and solar project manager for Synergy Electrical Energy Systems Inc. (SEES). On January 1, 2007, Jeff and long time employee of SEES, Michael Pane, purchased the assets of SEES. The name was changed to Synergy Solar & Electrical Systems Inc., and the resources of the company were redirected primarily towards solar design, sales and installation. Jeff ‘s primary responsibilities for Synergy are sales consulting, solar system design, office management, and customer service. Along with his knowledge of business and sales Jeff brings his passion for the environment and commitment to building community to Synergy. In 2011, Jeff received his C46 Solar contracting license. In 2013, Jeff received his NABCEP Technical Sales Professional Certificate. Jeff is a lover of the outdoors and enjoys diving, playing volleyball, hiking, kayaking, camping, and enjoying all the wonders Sonoma County offers. 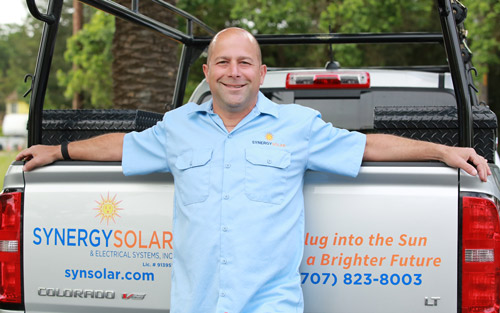 In 1992, his love of the outdoors and the anticipated arrival of his daughter brought Michael and his wife to Sonoma County.

Read more
Michael was employed for ten years with Becoming Independent (BI), a program that supports and advocates for adults with developmental disabilities. His work at BI included capacities from direct service to management. This fostered a great pleasure and ability to work with people while developing problem solving, organization and management skills, which he brings to Synergy.

In January 2003, Michael made a career change. He began working for West County Electric (which became Synergy Electrical Energy Systems Inc.) as an apprentice, allowing him to follow his passion for the environment and solar energy. He advanced to journeyman electrician and on January 1, 2007, Michael and fellow employee Jeff Mathias purchased the assets of the company. The name was changed to Synergy Solar & Electrical Systems Inc. to reflect the growing focus on Solar PV energy. In 2008, Michael received his C10 Electrical Contracting License, and in 2012 he received his NABCEP Solar PV Installer certification. His primary responsibilities for Synergy include Electrical Design, Installation Management and Warehouse Management. Michael is committed to customer satisfaction and brings attention to detail to all of Synergy’s projects. He emphasizes the team approach when working together with his crew and customers to maintain a healthy working environment while providing a top quality product. Michael is an avid music fan, a lifelong soccer enthusiast and enjoys all things outdoors including kayaking, hiking, biking, camping and backpacking. Most of all he loves being a dad and having an active role in the community